Do caterpillars bite? Yes.
I have been asked that question on numerous occasions over the years. Usually, the inquirer is rather naïve on the ways of nature, so my response is never demeaning in any way. However, many fellow gardeners are not even aware of this fact. It seems for most, it takes an actual “bite” to realize that caterpillars do indeed… bite. I am one of this group, although before being bitten, I merely had my suspicions. I will start with my suspicions…
Most of my… I’ll say “concern”… over whether caterpillars bite or not arose over the nasty creature known as the tomato hornworm. Tomato hornworms can grow to be six inches long and are one of the largest caterpillars in our region, if not the largest. They devour tomato foliage… and tomatoes quite rapidly. Having witnessed the damage countless times… and even heard the sound of their chewing on tomato plants in a greenhouse, I often wondered whether such voracious creatures would actually bite a human. I have not allowed myself the chance to find out that answer. However, as I hunt with my Tomato De-Hornwormer, their aggressive reaction is answer enough for me. I have pictures to prove this. And by the way, a Tomato De-Hornwormer is also known as garden clippers. You’ll see in the pictures below… 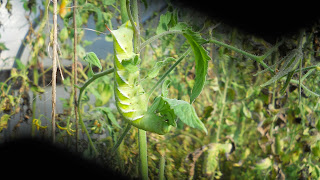 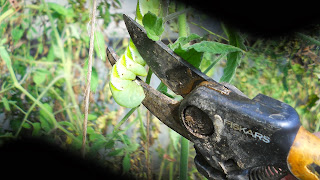 Here, the tomato hornworm curls up as the Tomato De-Hornwormer approaches. This is a common reaction of caterpillars when touched. Perhaps it is a “play dead” reaction. 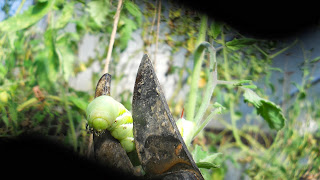 However, when the Tomato De-Hornwormer begins to actually harm the hornworm, it aggressively bites at the harming blade. While the hornworm’s defensive reaction is never successful, the aggressiveness of that reaction makes me glad that my fingers weren’t in the midst of that struggle.
So much for the tomato hornworm. That story is the same every year, but this year on two separate occasions, I experienced a situation that definitively confirmed my suspicion that caterpillars do indeed bite. Unfortunately, I do not have pictures for these two situations.
The first situation involved cutworms. Cutworms are nasty, tough skinned caterpillars that chew plants such as lettuce and spinach close to ground level, thus “cutting” the plant which also kills the plant. In one particular garden, I always have significant cutworm damage on my summer planting of lettuce. My organic approach to control this pest is first, “know thy enemy”, that is, to recognize its damage, then, seek and destroy. Cutworms usually burrow into the soil a couple inches or so, and a pencil eraser-sized hole can be spotted on the surface. Then, I dig down with my fingers until I find the nasty critter. Once the cutworm has been captured, at this point it usually curls up into a ball of sorts, I squish the culprit until it pops. I have learned to squish directionally so that none of the critter’s green innards ends up on me.
Earlier this year, I found a full-sized cutworm specimen about two inches in length, which I wanted to show Lori, who works with me and is not familiar with what many of the pests of the farm actually look like. She was at the cleaning station, so I walked toward that area cupping the curled up critter in my left hand. Then, just as I reached my destination, I felt a sharp, yet slight, pain in my left hand, which startled me enough to fling the critter… somewhere. That dang thing bit me!!! It must have gotten over the “play dead” stage and decided to be more aggressive to its captor. As for the bite… after all, they can eat through lettuce stems, I’m just hoping human flesh does not taste as good…
The second situation really startled me. After sorting salad mix, I picked up the sweatshirt I had laid down on some crates to head home for the day. My house was rather cold upon entering, so I put on the sweatshirt. A minute or so later, I felt something crawling in the left sleeve of the shirt. Thinking it was a spider, I jostled that portion of sweatshirt. About a minute later, I felt what I can only describe as a mild electric shock in my left arm. It was like nothing I have ever felt before and I immediately knew that something bit me… but what? Without hesitation, I aggressively squeezed that portion of the shirt sleeve, then ripped off the shirt and turned it inside out. Yes, I had been bitten by another caterpillar. Laying on the ground was the deflated carcass of a long-haired yellow caterpillar that I have as yet not been able to identify. And on the white t-shirt I was wearing under the sweat shirt there was a rather large dark green stain. Damned caterpillar! Who knew they could be so aggressive?
Well, I now do know that caterpillars can definitely bite. And so now do you! You’re welcome!
Posted by Nev-R-Dun Farm at 6:55 PM No comments:

Nev-R-Dun Farm
Name's Tom Reinhardt. I am a certified organic farmer in the state of Maryland. Thanks for reading my rambling muses.